During the Summer of 2016, Seiko Instruments introduced its newest Mobile Printer Series known as the MP-A40, in response to business processes becoming more digitally driven for consumers and end users in a variety of vertical markets. With features such as withstanding drops of more than 6.5 feet, its ability to handle a 4-inch paper width, as well as its IP rated ruggedness to endure extreme temperatures, the printer is set to exceed the needs of today’s challenging internal and external environments.

Now Seiko has once again stepped up to meet these trends with the design of an accompanying mobile printer series known as the MP-B20. Similar to the MP-A40 model, the printer offers its own unique set of features such as stability following 5-foot drops, a 2-inch paper width and high-resolution receipts that print at more than 3 inches per second. Designed to be used in a variety of vertical markets, such as retail, hospitality, healthcare, and warehousing and logistics, one of the printer’s main features is its compatibility with mobile payment and mobile POS applications—specifically “Pay at the Table,” and direct receipt delivery.

With a 2-inch paper width, which far outshines any of its competing mobile receipt printers currently on the market, the MP-B20 Series printers weigh less than 1 pound with battery pack. What’s more, is that the printer’s ability to withstand drops of up to 5 feet, is a perfect fit for a diverse mix of vertical markets; from hospitality and retail where space and convenience are of paramount importance, to other areas such as healthcare and warehousing/logistics, where ruggedness and environment play an important role.

Similar to the MP-A40 printer, the MP-B20 Series Printer features a contemporary yet functional design, while still offering the ability to print high-resolution receipts at more than 3 inches per second—one of the highest print speeds on the market. This is especially helpful in vertical markets where efficiency and speed are key and which require items such as barcoding, for instance in a medical and/or hospital setting. Other verticals can benefit from the printer’s rapid speed, such as a line-busting scenario at a retail store, or a pay at the table situation in a restaurant.

The MP-B20 Series Mobile Printers offer compatibility with the latest operating systems including Windows, 7, 8, 8.1 and 10. There is also SDK availability for Android and iOS print class libraries for added mobility. The printer also features a USB style charger, as well as a compact and portable cradle for quick and easy charging options. 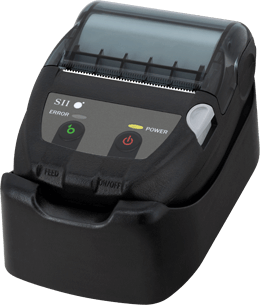 *1 This number is test result based on SII procedures, not guaranteed value.
*2 Using specified thermal paper.
*3 Excluding protrusion.
*4 With battery, without paper roll.

We use cookies to analyze both user behavior and marketing measures in pseudonymous form (conversion tracking, analysis). By continuing, you agree to the use of cookies and accept the measures detailed above. For more information, please refer to our Privacy Policy.In case of sale of your personal information, you may opt out by using the link Do not sell my personal information.
Cookie settings      OK
Privacy & Cookies Policy

Any cookies that may not be particularly necessary for the website to function and is used specifically to collect user personal data via analytics, ads, other embedded contents are termed as non-necessary cookies. It is mandatory to procure user consent prior to running these cookies on your website.